My Story on Depression 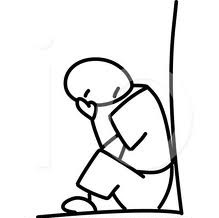 
I was in my twenties when I first suffered with depression.  No one knew what was going on— neither my mother nor my stepfather.  When someone would look at me, I seemed to be fine; but inwardly, I was depressed.  When I suffered with that depression for several months; all day and every day, a voice would talk in my head reminding me that I was worthless due to disobeying God.  You see, I made a terrible mistake in church service by speaking and the words that came out of me was not spoken by God— it was by a demon spirit in which then I was not aware of such spirits.  The next morning, the pastor called my mother and blasted her out over the phone.  Before handing the phone over to me, she gently said, “Just say yes.”  When I answered the phone, he then proceeded to blast me out in yelling at me that I was wrong.

I attended church service that morning and as always the pastor expected everyone to say something.  So I did.  As I was speaking, he looked at me as if I had some nerve speaking again.  I then sat down after I finished.  When I returned home, I thought about what he told me.  I then asked the LORD if that was true in that it was not Him who was using me, but the devil.  The LORD then said, “Yes, it was devil.”  I then repented, but a voice kept coming in my head and saying to me that I was worthless because the devil used me and God will not forgive me.  That voice would not leave and it continued to accuse me of being so worthless and unforgiving.  It was a constant torment of accusation.  I could ONLY think about how worthless I was for allowing the devil to use me.  I was so depressed that for months I did not even comb my hair.  I would sit quietly on the couch in the living room staring in one place.

Again, I appeared to look fine and everybody thought I was fine.  At that time, no one knew about the fellowship of the Holy Spirit.  Therefore, He could not reveal or show them what was going on with me on the inside.  Every day I sank deeper and deeper into that depression.  My skin color changed and became darker.  I experienced hair loss.  I could not read or study God’s Word as I done previously.  My mind was ALWAYS on the inward accusations I was hearing.  Even when I attended church services, the pastor would teach and preach from the Bible using the words to throw “stones” of guilt and condemnation specifically at me; and it caused me to sink a little deeper into that depression.

After months of going through this torment, one day a loving Voice spoke to me.  He gently said, “Terry, why are you allowing these people to bother you?  Their life is behind them and your life is ahead of you.”  I knew exactly what the Voice meant.  You see, the pastor, his wife and their buddies were over 50 years old; and they would condemn me every time they spoke in church.  After the LORD spoke those words to me, it was as though a LIGHT shined into my heart; and IMMEDIATELY, I felt something leave me.  I jumped up and started combing my hair.  I was joyous all that day.  It no longer mattered whenever I went to church service and the pastor would use God’s Word to throw stones at me.  I was so happy and I never experienced depression again.

It was when I was grown and had TRULY surrendered my life to God was when I realized what had really happened to me.  I then saw that depression was a demon spirit and it entered me through my disobedience to God.  My heart was not FULLY surrendered to God when I would get up in church services to speak.  Also due to childhood experiences, I became demonized and did not know it; for that was the doorway the demon used to manifest through me when I spoke that day.  The same demon was the one who had opened the door for demons of condemnation and guilt to enter me and whisper their accusations in my hearing that I was so worthless that God will not forgive me.  The demon spirit also opened the door for other demons to enter (e.g., depression, unbelief and guilt).  It also wanted to open the door to a mental spirit and a spirit of suicide, but the LORD God FREED me before it could be successful.

Selah †
Posted by Evangelist King † A Female Exorcist and Missionary at 7:41 AM No comments: