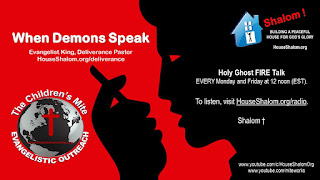 The LORD God told me to do deliverance sessions in 2012. As I obeyed His specific instruction, I was getting too relaxed in expecting demons to leave quietly. Then the LORD allowed them to speak as I was ministering FIRE prayers to His dear child Farah. Farah is from Haiti and was dedicated to Satan before her birth. Therefore, there were MANY demons in her. Tune in and listen to just a portion of her deliverance where the demons spoke. This session TRULY taught me to NEVER get use to a certain method because the LORD God will change it as He sees fit. Selah.

To listen to Farah’s complete session, click here. Tune in and listen to the Holy Spirit talk to you! Holy Ghost FIRE Talk LIVE Broadcast EVERY Monday and Friday at 12 noon (EST). To listen, visit HouseShalom.org/radio. Shalom †
Posted by Evangelist King † A Female Exorcist and Missionary at 3:00 PM No comments: 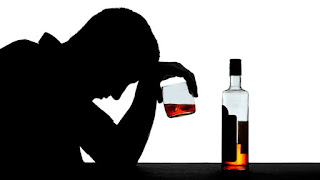 MANY years ago the LORD God placed our family in assisted housing. I knew by the Holy Spirit that it was temporary and for a purpose. So I told the LORD God whatever He needed me to do, I’ll do it. At that time, my husband was the one who was working and I stayed at home. So one day as I was feeling comfortable in my home, someone knocked on the door. I peeped through the window and saw it was my younger aunt who was a drunkard and witchcraft worker and can be very annoying. I quickly said to myself, “Oh, no! It’s her!” I then closed the curtain. IMMEDIATELY, the LORD God said with a gentle voice, “You told me to send them.” I quickly repented and opened the door. She apologized for coming over but said she had no one else to turn to.  She confessed that a voice kept telling her to kill herself and she’s afraid that she would do it. At that time, I had not begun my public ministry of healing and deliverance as I do today; but because I believed in His name, I laid my hand upon her head and prayed for her.  IMMEDIATELY, she said it was gone and she left.  Dear hearts, how many times have we asked God to use us and when He send someone to us that we don’t approve of, we reject Him? REMEMBER, God doesn’t see a person as we see them. He love us all and that include drunkards and witchcraft workers. Selah (think on it) †
Posted by Evangelist King † A Female Exorcist and Missionary at 7:15 AM No comments:

Run from Idolatry and Fornication 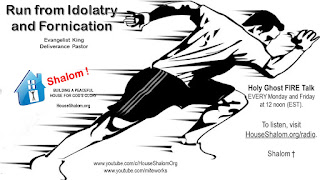 Tune in and listen to the Holy Spirit talk to you! Holy Ghost FIRE Talk LIVE Broadcast EVERY Monday and Friday at 12 noon (EST). To listen, visit HouseShalom.org/radio. Shalom †

Posted by Evangelist King † A Female Exorcist and Missionary at 1:31 PM No comments:

The Blind Leading the Blind 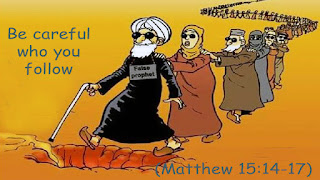 My husband and I were going to work one morning when he suddenly told me to look. We saw the strangest thing. At a corner, a blind person was trying to lead another blind person across the street. That was a strange sight. You may wonder why we didn't stop to help them.  It's because we knew they would not have accepted our help.  I then remembered the Word of God regarding blind guides (or leaders). In order to follow a blind leader, one must be blind themselves; and according to the Word of God, if the blind leads the blind, both will fall into a ditch and perish Therefore, BEWARE of blind guides (or leaders)! Selah †
Posted by Evangelist King † A Female Exorcist and Missionary at 12:00 PM No comments: 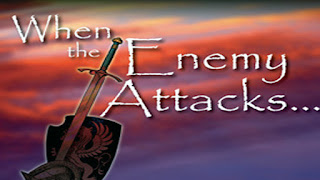 A person who has submitted them self to God, the Evil One and his followers can ONLY attack them from a distant-meaning from a position of being far away. For James 4:7 says, "Submit yourselves therefore to God. Resist the devil, and he will flee from you." The word "flee" means "to run away, take flight or take off". Satan's ONLY objective or intention is to destroy a person's faith in God-to destroy their faith in believing God's word. When a person submits to God, their act of obedience closes EVERY door to disobedience, which is the door Satan ALWAYS use to enter into a person's life; and the LORD give the person strength to resist or counterattack the devil. This is when Satan flees or run away from the person. Now Satan does his attacks or warfare against the person from a distant-meaning from a position of being far away. This is known as "distant" attacks. EVERY child of God should expect this type of attack from Satan. Jesus Christ did and so should we.

Psalm 34:17 and 19, "The righteous cry, and the LORD heareth, and delivereth them out of all their troubles. Many are the afflictions of the righteous: but the LORD delivereth him out of them all. John 14:30-31 (MB), "I'll not be talking with you much more like this because the chief of this godless world is about to attack. But don't worry-he has nothing on me, no claim on me. But so the world might know how thoroughly I love the Father, I am carrying out my Father's instructions right down to the last detail. "Get up. Let's go. It's time to leave here." Luke 4:28-30. "And all they in the synagogue, when they heard these things, were filled with wrath, And rose up, and thrust him out of the city, and led him unto the brow of the hill whereon their city was built, that they might cast him down headlong. But he passing through the midst of them went his way."

Distant attacks are NOT attacks from Satan where a person has and is experiencing bodily harm. This type of attack falls into the next category known as a personal attack.

Personal attacks from Satan stems from an individual's failure to submit to God, which includes but not limited to, bodily harm (e.g., hearing voices, seeing or hearing demons in the spirit realm without the leadership of the Holy Spirit, receiving scratches and/or bite marks on the body, feeling movements in the body, bones being broken in dreams, and more). Rather knowingly or unknowingly, the person opens the door to disobedience for Satan to come through to personally afflict harm upon them. 1 John 3:8, "He that committeth sin is of the devil; for the devil sinneth from the beginning. For this purpose the Son of God was manifested, that he might destroy the works of the devil." During Jesus' earthly ministry, Satan could not get close enough to Jesus and personally harm Him because he NEVER opened the door to disobedience. Therefore, Satan, His Enemy could ONLY attack Jesus from a distant, which is from the position of being far away. When the day came for Jesus to finally fulfill His ministry according to 1 John 3:8, it was ONLY then Satan was allowed to get close enough to Jesus and afflict physical and bodily harm to Him. Why? Jesus Christ knew no sin. He NEVER disobeyed His Father. So in order for Him to save or prevent Satan from not only stealing or destroying us; but to prevent Satan from also killing us, Jesus became "sin" in our place.

Sin is rebellion and disobedient toward God-against ANYTHING and EVERYTHING He say. Sin is "the door" Satan ALWAYS use to enter into this realm. So when Jesus Christ became "sin" in our stead, even though He knew no sin, this gave Satan's permission to finally touch Him and to personally afflict EVERY type of affliction onto Jesus' body and to finally kill Jesus. This was the ONLY time Satan could grab onto Jesus and it was by the Father's will for Satan to do so. Now I say that to say this. Because of Jesus' actions, we have been given access to God by the Holy Spirit. Christ Jesus NOW lives in us-born again Believers. Therefore, IF we continue to live a lifestyle submitted to God, then Satan CANNOT hold his grip onto us. For God says in Ephesians 6:12, "For we wrestle not against flesh and blood, but against principalities, against powers, against the rulers of the darkness of this world, against spiritual wickedness in high places."

IF you are born again and are experiencing personal attacks-which are attacks where Satan has and/or is bodily harming you, then there is an "open" door to disobedience in your life. I know you know what it is because even before a person commits the open act to disobedience, the Holy Spirit ALWAYS warns them. The LORD says, "Repent and sin no more." James 5:16 (MB), "Make this your common practice: Confess your sins to each other and pray for each other so that you can live together whole and healed. The prayer of a person living right with God is something powerful to be reckoned with." 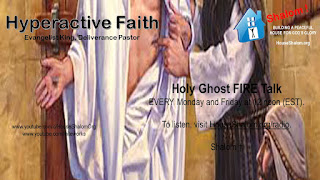 The word "hyperactive" means "abnormally or extremely active". Tune in and listen to the Holy Spirit talk to you! Holy Ghost FIRE Talk LIVE Broadcast EVERY Monday and Friday at 12 noon (EST). To listen, visit HouseShalom.org/radio. Shalom.

Posted by Evangelist King † A Female Exorcist and Missionary at 11:12 AM No comments:

Our Bodies A Living Sacrifice 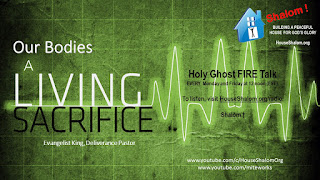 I beseech you therefore, brethren, by the mercies of God, that you present your bodies a living sacrifice, holy, acceptable to God, which is your reasonable service. Tune in and listen to the Holy Spirit talk to you! Holy Ghost FIRE Talk LIVE Broadcast EVERY Monday and Friday at 12 noon (EST). To listen, visit HouseShalom.org/radio. Shalom †

Posted by Evangelist King † A Female Exorcist and Missionary at 10:59 AM No comments: